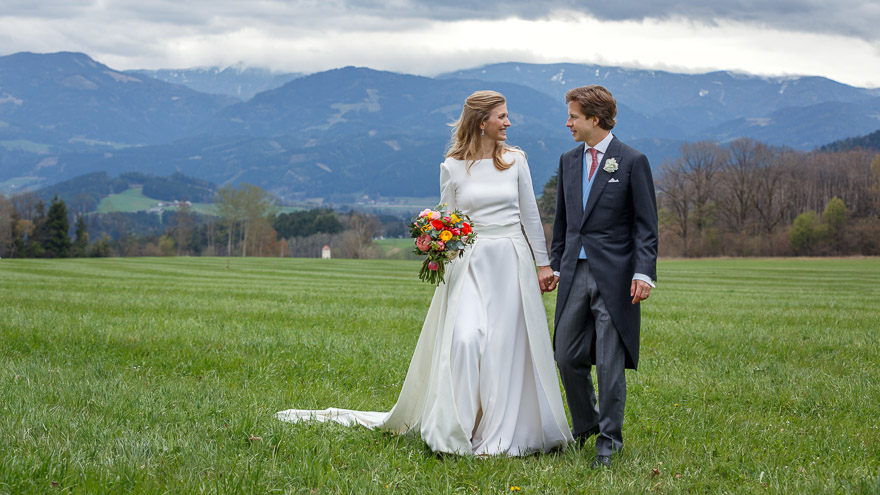 Posted at 16:19h in Wedding Photography by admin 0 Comments

The wonderful wedding of Alex and Franziska was a two-day event in Styria, Austria at colorful locations in the vicinity of the Red Bull Ring at Spielberg. Two countries met each other: Franziska is from Austria and she has Austrian and Hungarian origins, while Alexander is from München, Germany.

On Friday there was a lunch and dinner for the family members in Schloss Gabelhofen, which combines historic architecture of a moated castle and the warmth of a modern hotel.

On Saturday I  started to capture the getting ready moments of Franziska in Hotel Hofwirt in Seckau. The Baroque building with its elegant suites is located next to the Seckau Abbey in the Seckau Alps. The bride and her bridesmaids enjoyed their time there and they also opened a bottle of champagne.

350 guests attended the wedding ceremony of Alexander and Franziska in the Basilica of Seckau, which is the abbey church of the Benedictine Abbey of Seckau. It was a magnificent event, the invitees were very elegantly dressed. After the long ceremony I captured group photos with the family members in front of the abbey, then I took the newlyweds to a nearby green field with the mountains of the Alps in the background to take a few portraits of them. After the short photo session we joined the reception in Hotel Hofwirt.

The evening took place at Schloss Hautzenbichl in Kobenz. Since the castle proved to be small for such a large wedding party, the dinner tables were set in a tent next to the castle. Alex and Franziska first met on their holidays in Kenya and it gave them the idea to have an Africa-themed wedding decoration. The tables were decorated with huge Paradise Birdflowers (Strelitzia), it was a sight to behold. Speeches by friends and family members ensued, then after the dinner everyone moved to the dancefloor. The band was the famous Partyssimo from Hungary, but later a DJ also played music.