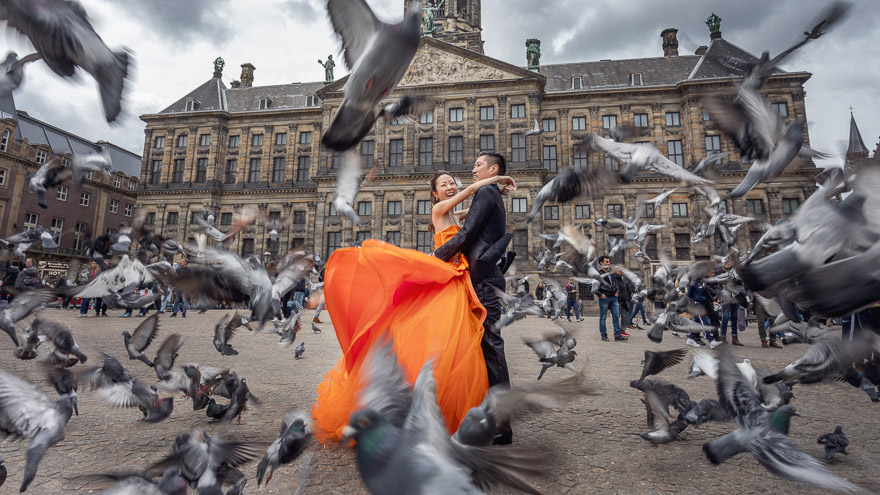 Posted at 08:16h in Wedding Photography by admin 2 Comments

In January I was contacted by a tour coordinator to do a Japanese couple, Maiko and Yuya’s pre-wedding photo shoot in the Netherlands, which four months later became reality. We planned two days for the portrait session, with four different wedding dresses. On the first day our bride, Maiko started with hair and makeup in Royal Boutique Apartment Amsterdam, then an elegant pink Hummer waited for us to take us to the famous Keukenhof Gardens. Unfortunately, it was raining there and we had to leave the location. We drove to Gouda, where it was rainy, as well, thus we were not able to visit the famous cheese market. Instead we went inside Sint Janskerk, which is the longest church of the Netherlands, especially famous for its stained glass windows. The Gothic church was beautiful indeed with its huge spaces, we could start shooting with the white wedding dress. The lights were dim and we were not allowed to use flash, but fortunately we still had some success as some light filtered through the roof. Later Maiko switched to the red dress, which offered new opportunities in the church. As the weather started to clear up, we traveled back to Keukenhof to take some wedding photos in the beautiful flower gardens. Keukenhof, The Garden of Europe is one of the world’s largest flower gardens, situated in Lisse, South Holland. Around 7 million flower bulbs are planted year-to year in the park which covers 32 hectares. We had only an hour to shoot there, but the colorful setting was really gorgeous and very well suited the pink dress of Maiko. We were all tired by the evening, it was time to go back to Amsterdam and take a good night’s rest.
The following day we moved to the luxurious six star Hotel TwentySeven in the heart of Amsterdam, where our Japanese wedding couple rented a stunning suite. After the makeup and hairdressing I also captured some getting ready moments, then we used the lavish interior of the hotel for some photos. Outside it was cloudy and cold a bit, we had just a short amount of time to take wedding photos in the orange dress at Dam Square in the heart of Amsterdam. We were lucky to capture some really dynamic wedding images with pigeons at Dam Square and later Maiko and Yuya also hired a carriage to drive around the city. Unfortunately, I could take only a few shots outside by the canals as we were running out of time and it started to rain again. Still, all of us got some unforgettable moments and quite a few great images. You can see these photos in the following gallery, I just switched the two days.

If you need a wedding photographer in the Netherlands, please feel free to contact us.